There is a subtle opportunity when you are being offered help.

As a strong-willed, but shy, little girl, I was presented with plenty of life challenges navigating friendships and social interactions at school. They were perfect opportunities to admit that I was never meant to do this alone. In hindsight though, I can see that too often I refused to ask for help. I was always determined to do things on my own. Why? Probably to avoid all the emotions I’ve already mentioned.

I remember a time during college after I had returned home for the holidays. Sitting with my mom, reflecting on my grade-school years, I mentioned how much I had been teased when I was young. She was surprised. Because as attentive as she had been she had never known. She never knew because I never told her. She expressed how sad she was that she didn’t help me when I needed it. But her little girl had thought she could handle it on her own and that her parents would be disappointed to hear that she wasn’t liked — because perhaps that meant that there was something wrong with her. Unfortunately, at the time that little girl didn’t know, as I do now, that the other kids’ responses really had nothing to do with her.

In particular, I remember being made fun of for my name. “Ash-WEE-NEE” they would say, with emphasis on the last two syllables. (Even now, when people unintentionally mispronounce my name, I consciously have to intervene on my thoughts to override the emotional memory of shame. I remind myself that they just don’t know how to say my name yet, or that they can’t. Interesting right?)

I also remember the attention I received for my love of wearing printed, patriotic-themed T-shirts. For several years, this was a popular style for kids printed T-shirts. I felt such a pride and sense of community with my country when I wore those shirts. But several boys in my class would yell, “Patriotic Woman!!” Being seven or eight years old, I was embarrassed and felt the sting each time they drew attention to my preferences. The sting was felt not because of embarrassment from the attention, but due to the sadness of being truly unseen.

Only in recent years did I realize more fully this lifelong pattern of resisting and rejecting help. In fact, as I had alluded to above, often I would try to preemptively demonstrate my ability and strength in order to create an image of someone who didn’t need help to be offered. This way, I didn’t have deal with the possibility that people didn’t see me, or care enough to reach out. Or in the event that people did care, I wouldn’t have to go through the discomfort of feeling that connection, that oneness that you feel when you actively accept the help that you are receiving.

When we’re young, receiving help is filled with practical meaning. Sometimes, it may be very transactional in nature. “I wanted ____, so I asked for help.” Other times, there is a bit more of a narrative that’s layered on: “I couldn’t do it, so they helped me.” The explanations often end there — a desire fulfilled, a lack of ability, and so on.

As we grow and evolve, we realize the act of receiving help is more nuanced, and goes deeper than what we can see with our own eyes. As someone is in the process of giving you help, of delivering help directly to you, you start to receive it. What is your response then? This is where the opportunity lies.

There is a distinct moment in the act of receiving help where you have the opportunity to respond with acceptance. Acceptance of your own human limitations. Acceptance of another person’s love. Acceptance of the of the fact that you are not a lone individual in this world, but rather connected to a larger whole. In fact, acceptance that you really aren’t that different from the one who is offering the help — there is a oneness that exists. And in that oneness, you are bigger and more capable than you imagined — not smaller or less than. In this way, you are empowered to make a difference as well.

But many times this can all feel scary.

So we avoid, we resist, and we reject help.

But what if there could be a joy in receiving help?

If people are wholeheartedly helping you without any expectations in return, including for recognition or accolades; if they are able to help you because they see your own power, not the absence of it — then your own growth, ability, joy, and impact are enhanced when you receive that help with full acceptance.

As a leader, imagine the healing that would occur, within yourself and in the world, if we all approached helping in this way. Imagine how much stronger we would be. Imagine the ideas that would emerge. How much impact could be made!

It is difficult, as kids, adolescents, or young adults, to understand these lessons, because we are so often taught that receiving help is weak. As leaders, so many adults believe they have to figure it out on their own too — that they alone must make decision, that solutions will ultimately come from them alone. We create endless narratives in which we play the parts of “heroes” and “victims”, and thereby further perpetuate these narratives. But this doesn’t have to be where it ends.

In fact, when helping goes beyond a transactional interaction (and maybe when it is just that too), I think a commitment to personal evolution allows us to eventually embrace being helped from a new consciousness. To let go of victimhood and the hero character. To see the expansiveness of what’s possible when we embrace each person’s unique abilities as well as our collective oneness. 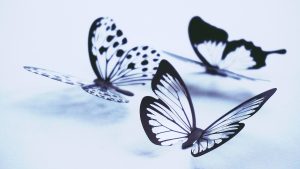 Don’t be afraid to evolve

Catching Up Won’t Get You There

What Is Your Spark?